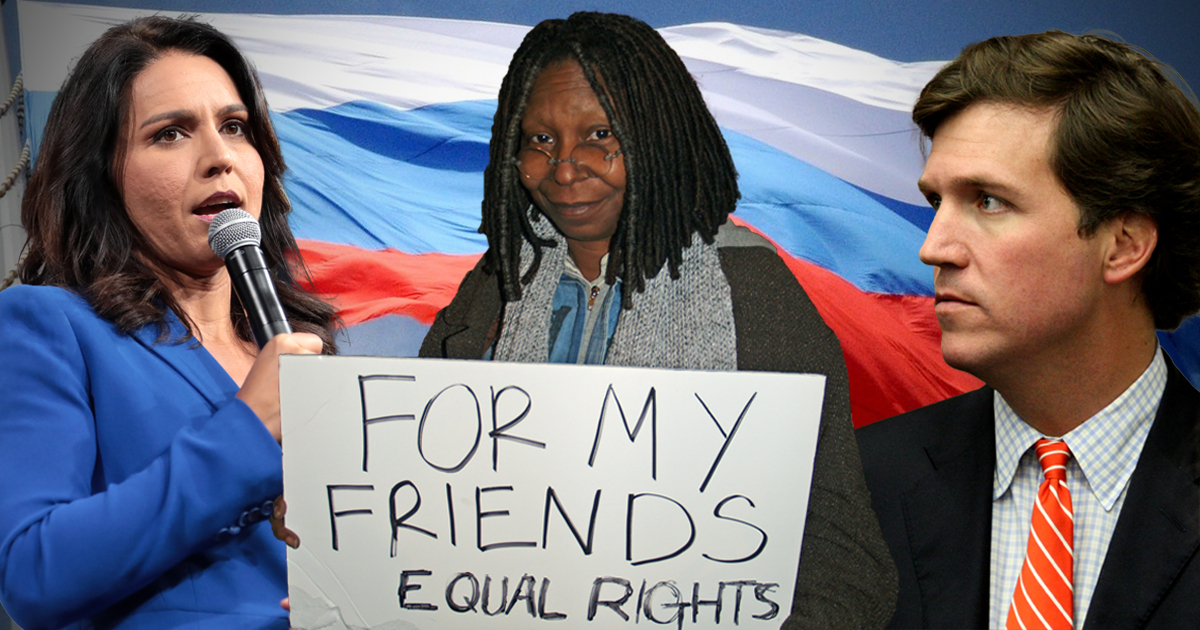 The View hosts Whoopi Goldberg and Ana Navarro advocated for the arrest of Tulsi Gabbard and Tucker Carlson for spreading “false Russian propaganda,” after the former Democrat presidential candidate and Fox News host both highlighted the facts surrounding the US-funded biolabs in Ukraine.

Last week, Carlson featured Tulsi Gabbard on his show and the two discussed the facts on the ground of the biolabs that are funded by the American government in Ukraine, which the Russian government alleges were being used to create bioweapons.

While the facts on whether the “dangerous bioagents” were being developed into weapons are yet unknown, the US media had denied the existence of the labs to begin with, something the pair criticised during the segment.

On Monday, The View hosts attacked Carlson and Gabbard for addressing the topic, suggesting that they were peddling “false Russian propaganda.” The language used by the hosts was nearly a word for word match for the language Mitt Romney used to attack Gabbard on Sunday.

Ana Navarro demanded that the directors board of Fox News “step in” to punish Carlson, or risk Fox News becoming “Russian state TV.”

Joy Behar insinuated that Carlson was being paid to peddle the alleged “disinformation.”

Gabbard, meanwhile, had already responded to many objections raised by the hosts in a response to Romney on Twitter, in which she used American sources.

“I think the DoJ, in the same way that it is setting up a task force to investigate oligarchs, should look into people who are Russian propagandists and shilling for Putin,” Navarro continued.

“If you are a foreign asset to a dictator, that should be investigated,” she said, going onto attack Gabbard for being irrelevant in one breath, and saying that she must be “brought down” in the next.

“They used to arrest people for doing stuff like this. If they thought you were colluding with a Russian agent, and if they thought you were putting out information or taking information and handing it over to Russia, they used to actually investigate stuff like this, and I guess now there seems to be no bars,” Goldberg said, seemingly yearning for the days of Joseph McCarthy and the Red Scare.

“People are not being told to hate Putin, [and] Putin doesn’t need a reason to be hated, it’s pretty much clear.”

This is so deranged. The View calling for Tucker and Tulsi to be investigated by DOJ and suggest prison. pic.twitter.com/t96QRUVKrb

Whoopi romanticizing McCarthyism actually was on my bingo card for 2022. https://t.co/jIpdR3ZJsr

.@ananavarro trashing @TulsiGabbard is the biggest cope. Tulsi was in Congress, while Ana was at McDonald’s. https://t.co/jIpdR3I8AT

These people want you to send your kids to fight and die for a country that would do this. LOL. https://t.co/LhOlBY86zH

The lack of self awareness is stunning. Do they not hear themselves? Do they not see the obvious historical parallels? https://t.co/g581UPT84a

This is why they didn’t want women to have the vote! https://t.co/OtmfzSvvNN

Not sure why all the outrage over this. You surprised? Communists lock people up (and worse) for disagreeing with them. You think @ananavarro is bad? Your neighbor, your crazy liberal aunt on Facebook, and many more would do the same to you without hesitation.