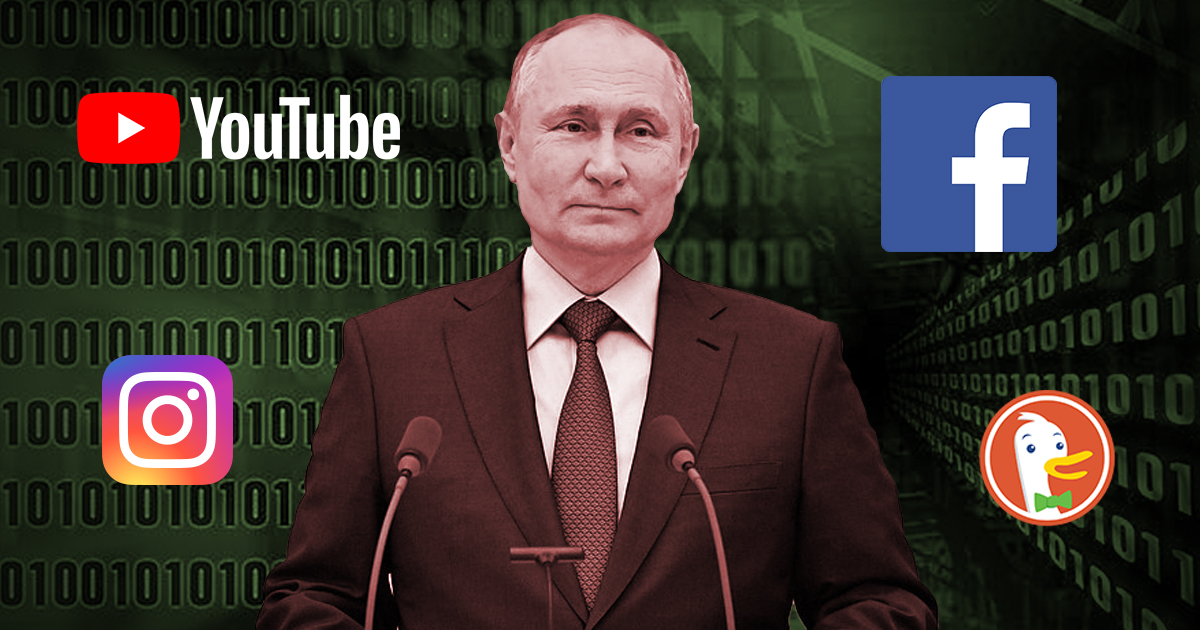 A great standoff between western Big Tech companies and the nation of Russia has emerged in recent days, with Russia restricting access to Facebook, Instagram, and other Big Tech sites in what appears to be retaliation for actions taken against Russia by those big tech companies following Russia’s invasion of Ukraine.

Soon after, the privacy-focused and previously “unbiased” search engine DuckDuckGo revealed it would censor Russian media in its search results, and today YouTube announced a global ban on all content from Russian state media.

For further context, just yesterday Valiant News Associate Editor Jack Hadfield reported that Mark Zuckerberg’s Meta will now allow users on Facebook and Instagram in some Eastern European countries to call for violence against Russian soldiers, as well as for the assassination of Russian President Vladimir Putin and Belarusian President Alexander Lukashenko.

From the report: “According to internal emails to Meta’s content moderators viewed by Reuters, there would be a temporary change to the hate speech policy allowed in Latvia, Lithuania, Estonia, Poland, Slovakia, Hungary, Romania, Ukraine, and Russia itself.”

“As a result of the Russian invasion of Ukraine we have temporarily made allowances for forms of political expression that would normally violate our rules like violent speech such as ‘death to the Russian invaders.’ We still won’t allow credible calls for violence against Russian civilians,” a Meta spokesperson said in a statement to Reuters.

In response, the Russian Embassy in the U.S. on Friday accused Meta of “extremist activities” over the new Facebook and Instagram policies, which Russian officials say lead to the incitement of hostility.

“Meta’s aggressive and criminal policy leading to incitement of hatred and hostility towards Russians is outrageous,” the Russian embassy said in a statement. “The company’s actions are yet another evidence of the information war without rules declared on our country.”

The Russian Embassy added that they wish U.S. authorities would “stop the extremist activities of Meta and take measures to bring the perpetrators to justice.”

The situation has prompted the Russian government to ban Facebook and Instagram in the country, declaring Meta to be an “extremist organization.”

Accessing the platforms in Russia will now be considered a terrorist offense, according to reports.

“A criminal case has been initiated … in connection with illegal calls for murder and violence against citizens of the Russian Federation by employees of the American company Meta, which owns the social networks Facebook and Instagram,” Russia’s Investigative Committee said.

The Big Tech bans come amidst a number of major Western companies that have ceased all activities in Russia. These include multinational brands like McDonald’s, Starbucks, Coca-Cola, USA Today, BP, Shell, General Motors, Nike, and PayPal.

In the finance realm, Goldman Sachs recently announced that it will stop business in Russia, becoming the first major Wall Street bank to leave the country over the conflict in Ukraine.

“Goldman Sachs is winding down its business in Russia in compliance with regulatory and licensing requirements,” a Goldman Sachs spokesperson said in a statement, according to CNBC.