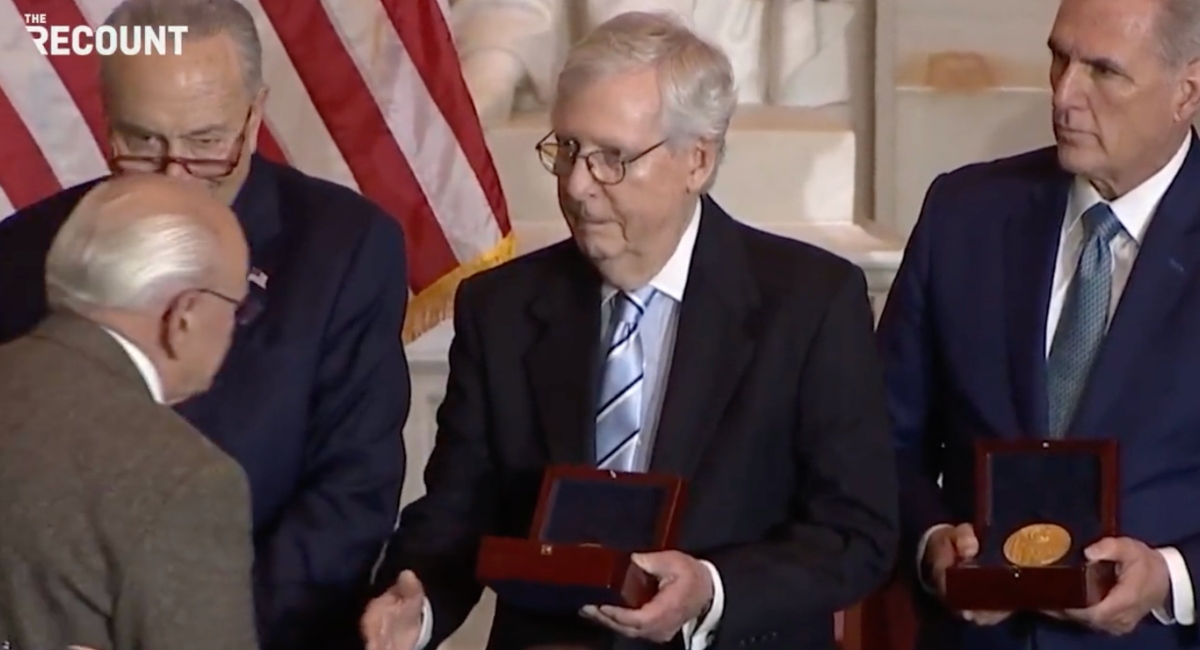 Two medal recipients, the mother and brother of deceased Capitol Police officer Brian Sicknick, who died a day after the Capitol riot of natural causes unrelated to the event, were captured on video declining to shake McCarthy and McConnell’s hands after they greeted House Speaker Nancy Pelosi and Senate Majority Leader Chuck Schumer.

In a video broadcast of the event which captured the embarrassing interaction, McConnell can clearly be observed reaching out in his hand, in what appeared to be a failed attempt at a handshake.

Watch the exchange on Spreely.video:

In addition to members of the Sicknick family,  at least two police officials can also be seen walking past McConnell and McCarthy, but have not yet been identified.

Officers in Washington’s district police force and a specialized force charged with Capitol security were present at the ceremony, including representatives of additional law enforcement agencies.

“I’m just tired of them standing there and saying how wonderful the Capitol Police is and then they turn around and … go down to Mar-a-Lago and kiss his (Trump’s) ring and come back and stand here and sit with – it just, it just hurts” she added.

When asked about the interaction on Tuesday, McConnell did not address the handshake flub and instead praised the law enforcement officers for their actions on January 6.

Sen. Minority Leader Mitch McConnell (R-KY) dodges a question then walks away after being asked about Capitol police officers and their families refusing to shake his hand at a ceremony honoring them: "I'd respond by saying today we gave the gold medal to the heroes of Jan. 6." pic.twitter.com/X2FEqmwlZP

“Leader McConnell, the family of Brian Sicknick chose not to shake your hand in today’s ceremony, and they said it’s because they’re concerned you have not done enough to call out former President Trump’s actions after January 6 and leading up to it. How would you respond to the family?” a reporter asked McConnell during a press conference.

Related  'I Won't Commit To Supporting Him': Larry Hogan May Challenge Trump in 2024

McConnell added, “I would respond by saying today we gave the gold medal to the heroes of January 6.”

“They laid their lives on the line. And that’s why we gave a gold medal today to the heroes of January 6,” McConnell told reporters before turning around and walking away.