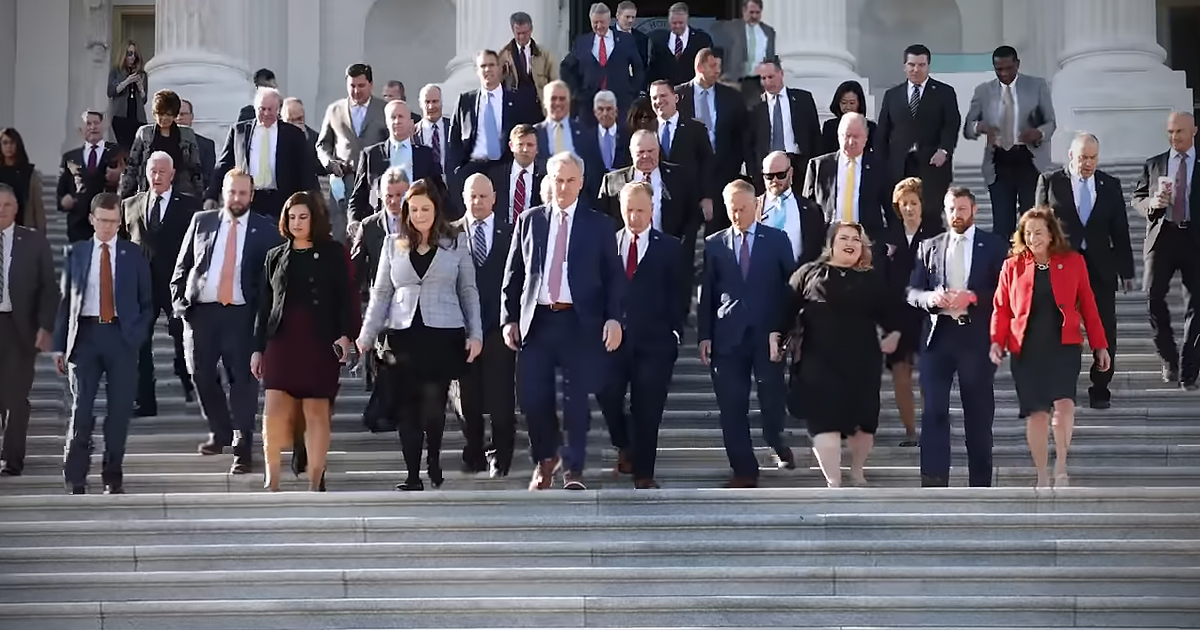 Today the Republican Party announced what’s being called a “plan to save America” and the party is calling its “commitment to America” to undo Biden-era crises that dominate headlines.

The media effort, headlined by House Minority Leader Kevin McCarthy and Rep. Steve Scalise, promises that a Republican-controlled Congress will push back on the White House and Democrats. This means unified Republican opposition to their attempts change the country’s economy in the name of climate change and its population demographics by way of mass illegal immigration.

“We have a plan. Today, House Republicans are rolling out our “Commitment to America,” which is a bold conservative vision for a prosperous America that will reverse Biden and Pelosi’s self-made crises,” Scalise writes in an op-ed published by Breitbart News. “Our plan is built on four key principles: an economy that is strong; a nation that is safe; a future built on freedom; and a government that is accountable.

Among other key points, the Republican plan includes a curtailment on out of control public education, tax cuts, moves to lower inflation, and support for both local police and those charged with securing the border.

Republicans have a plan to get all that back.

It's our Commitment to America. pic.twitter.com/lkHCsHTyOq

Regarding the “Parental Bill of Rights,” Scalise writes, “As millions of children struggled with remote and distanced learning, the Biden administration coordinated with teachers union bosses – instead of parents – and re-wrote critical portions of the Centers for Disease Control and Prevention’s school reopening guidance. This came after the union bosses complained that the guidance was too favorable towards opening schools.”

Thus, “By passing a Parents’ Bill of Rights, parents will have a stronger voice, and it will be easier for them to get involved with their kids’ education.”

On the topic of investigating Joe Biden, Scalise writes, “Despite control of both chambers of Congress, Democrats have refused to investigate the Biden administration’s failures and mismanagement of our country. This is a clear dereliction of duty.”

In a video posted to McCarthy’s YouTube channel, he further outlines the vision:  “Republicans have a plan for a new direction, one that will get our country back on track. It’s called the commitment to America,” McCarthy promises in the video.

The Commitment to America website seen in the video redirects to McCarthy’s government website, which further extols the virtues of the House Republicans’ plan.

A “Preamble” of the plan declares that Democrats and Biden “created crisis after crisis: from crippling inflation and rampant crime, to failing schools, border chaos, and disrespect for our nation across the globe” and “Worse still, they have ignored our constituents’ priorities and shown contempt for their values.”

Still, the Republicans promise that they will work with Democrats who share their values.

“But the extreme ideology of this democrat majority blinds them to the challenges of everyday Americans,” they warn. “They are simply too partisan and out-of-touch to correct course now. So be it.”

It is noteworthy that the Republicans’ messaging does not mention 45th President Donald Trump by name in its videos, on its website, or in its written documents.

McCarthy is generally considered to be a tenuous ally of Trump’s, with the Republican once threatening to break ties with the former president because of January 6. In recent months, however, McCarthy has sympathized with Trump and promised investigations into the Biden Department of Justice and FBI for their raid on Trump’s home.