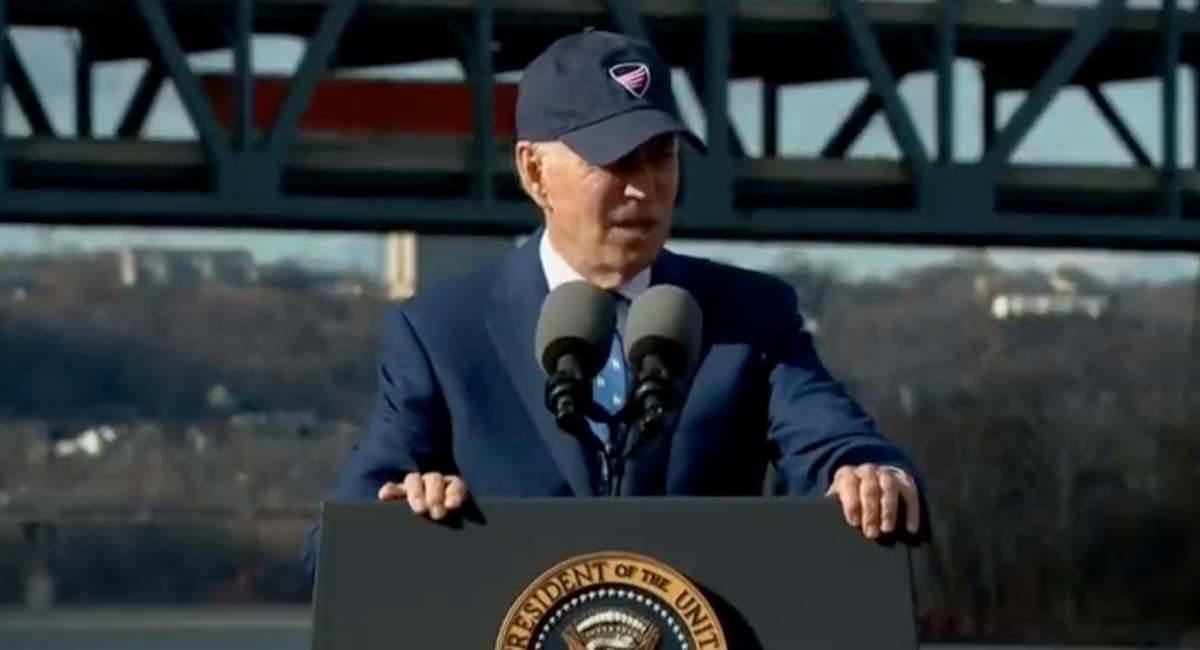 Joe Biden seemed to lose his train of thought while promising to “paraphrase” an old saying during a visit to Kentucky alongside Senate Minority Leader Mitch McConnell.

“I’ll paraphrase the phrase of my old neighborhood: The rest of the countries, the world is not a patch in our jeans, if we do what we wanna do, we need to do,” Biden, 80, said.

Biden: "I’ll paraphrase the phrase of my old neighborhood: The rest of the countries, the world is not a patch in our jeans, if we do what we wanna do, we need to do." pic.twitter.com/s9XccTkQpw

The president traveled to the Greater Cincinnati area to brag about his administration’s $1.6 billion federal investment to upgrade the Brent Spence Bridge connecting Ohio and Kentucky.

“After years of politics being so divisive, there are bright spots across the country,” Biden said. “The Brent Spence Bridge is one of them.”

It’s one big club and you’re not in it pic.twitter.com/yVWXFu88EM

Biden and McConnell both boasted their “bipartisanship” which led to the passing of a 1.2 trillion “infrastructure” bill, which the president signed in 2021.

“I believe it sends a message, an important message, to the entire country,” Biden said. “We can work together. We can get things done. We can move the nation forward.”

Conservative frustrations with McConnell are mounting in light of his role in the recently passed $1.7 trillion omnibus bill, the not-so-impressive Republican midterm performance, and helping Democrats get things done.

Ahead of the Kentucky visit, Biden declared that he and McConnell have been “friends a long time.”

President Biden on Senate Minority Leader McConnell: "We’ve been friends a long time and everybody’s talking about how significant it is. There’s nothing unusual about our relationship." pic.twitter.com/fj4pkAFtX4

“We’ve been friends a long time and everybody’s talking about how significant it is,” Biden told reporters. “There’s nothing unusual about our relationship.”

Ahead of McConnell’s joint tour with Biden, former President Donald Trump slammed the establishment Republican for aiding the Democrats in passing spending bills instead of challenging the White House’s agenda.