Senate Minority Leader Mitch McConnell is genuinely disliked by an overwhelming majority of Americans, according to a new poll that found 93% of voters do not find him “favorably.”

Civiqs polling, dating back to 2018, found that McConnell’s favorability rating had never sank as low as 7 percent — indicating that this would be the Kentucky Senator’s worst poll in career history.

McConnell has typically had low approval ratings, with the highest in recent years being just 31% in February and October of 2020.

McConnell’s low approval ratings come as he seeks to be reelected as the Republican Senate leader on Wednesday, facing widespread criticism from Republican Party leaders for subverting Trump-endorsed candidates in the 2022 midterm elections. 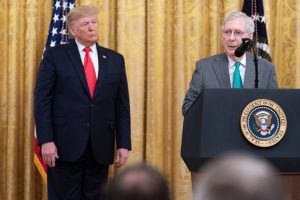 The former president added that Republicans must stop the widespread use of fraud-prone mail-in voting to restore American election integrity, slamming McConnell and former Vice President Mike Pence for certifying what he maintains were Joe Biden’s fraudulent 2020 electoral slates.

“When will Republicans learn? If they don’t stop this mail-in SCAM now, there won’t be any Republicans left. Get rid of McConnell. He should never have accepted what was sent to him by Mike Pence. He should have fought like hell, like the Dems would have. Losers are Losers, that will never change!” Trump added.

Senator Ted Cruz (R-TX) joined President Trump in casting the midterm blame on McConnell, slamming him for what “should have been a fundamental landslide election,” and citing the Minority Leader’s withdrawal of crucial GOP funding from Arizona Senate candidate Blake Masters’ campaign to use against another Trump-endorsed candidate in Alaska.

“Because Masters said he would vote against Mitch McConnell, and so Mitch would rather be leader than have a Republican majority. If there’s a Republican who can win, who’s not gonna support Mitch, the truth of the matter is he’d rather the Democrat win. So he pulled all the money out of Arizona,” Cruz said, adding that McConnell’s actions have left America “screwed for the next four years.”