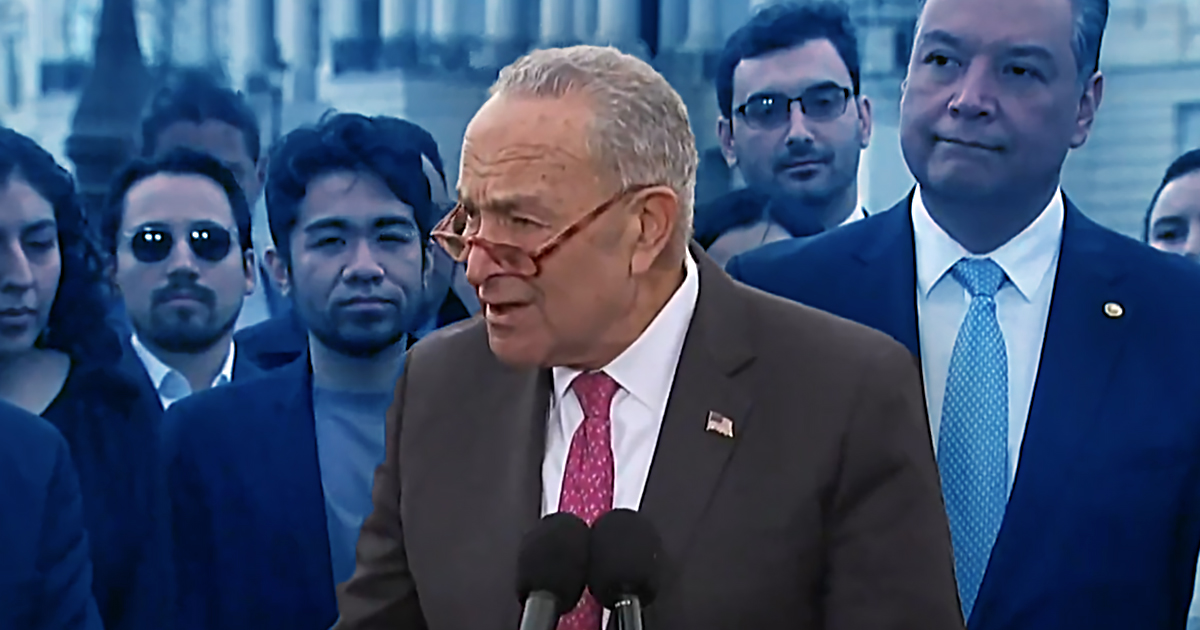 Senate Majority Leader Chuck Schumer has said that Democrats want to pass an immigration bill that will give citizenship to all illegal aliens, because native-born Americans have low birth rates.

Speaking in Washington DC on Wednesday, Schumer, who won re-election to his Senate seat last week, declared support from the Democrats for the plan to give amnesty and citizenship to every single one of the millions of illegal aliens currently in the United States.

Schumer said that the country needed to embrace illegal aliens into the wider society because “now more than ever, we’re short of workers,” adding that the native-born American population is “not reproducing on its own with the same level that it used to.”

With that in mind, he argued that “the only way we’re going to have a great future in America is if we welcome and embrace immigrants, the dreamers and all of them.” The “ultimate goal” for the Democrats therefore is to provide “a path to citizenship for all 11 million or however many undocumented there are here.”

Chuck Schumer says Democrats want to pass an immigration bill because "we have a population that is not reproducing on its own with the same level that it used to."

Schumer then calls for amnesty for "all 11 million or however many" illegal immigrants in the U.S. pic.twitter.com/Ws3thMaEbw

Conservative commentators were quick to call out Schumer, arguing that it’s exactly the policies and the Democrat party supports that has led to low birth rates. LifeNews noted that abortion, which the Democrats strongly support, has killed “64 million people” in America.

Abortion has killed 64 million people. That why there's a worker shortage. https://t.co/V1tXrcvpWh

Commentator Greg Price highlighted the fact that Democrats and leftists “say it’s empowering to stay single forever and never start a family, claim having kids destroys the environment, promote abortion as a moral good, and their solution when they realize people aren’t having enough kids is to import the third world to replace them.”

“They say it’s empowering to stay single forever and never start a family,” wrote Republican consultant Greg Price. “Their solution when they realize people aren’t having enough kids is to import the third world to replace them.”

Chuck Schumer has also been in government since the 1980s and helped create the economy of today that makes it virtually impossible for people my age to build wealth and start a family. The man has literally done nothing but preside over America's decline.

As one example, Valiant News reported last month that twice-failed Democrat gubernatorial candidate Stacey Abrams, suggested last month that having children was actually a bad thing, as it leads to inflation and therefore higher food and gas prices.

Fox News host Tucker Carlson last year came under fire for discussing the idea that Democrats want to replace the native-born American population with outsiders. “In order to win and maintain power, Democrats plan to change the population of the country,” Tucker argued in April 2021:

“That is provably true. And because it’s true, it drives them absolutely crazy when you say it out loud! A hurt dog barks. They scream about how noticing the obvious is immoral. You’re a racist if you dare to repeat things that they themselves proudly say! Most people go along with this absurd standard. They dutifully shut up – they don’t think they have a choice. But no matter what they’re allowed to say in public, everyone understands the truth. When you change who votes, you change who wins. That fact has nothing to do inherently with nationality. It’s the nature of democracy.”

“Demographic change is the key to the Democratic Party’s political ambitions. In order to win and maintain power, Democrats plan to change the population of the country.”

According to the results from Gallup’s annual poll on immigration levels, which it has conducted since 1965, most Americans want the levels of migration to be either frozen or reduced, with 38% wanting a cut in numbers.