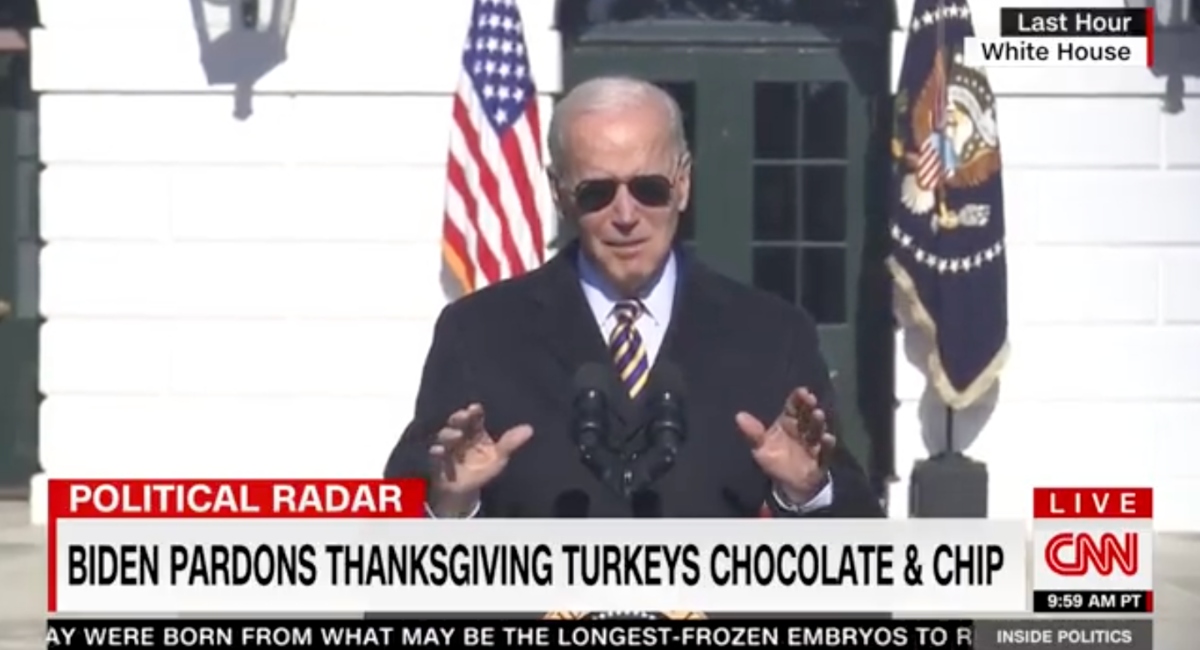 Joe Biden today insisted that the annual White House turkey pardon tradition this year was not plagued with any “fowl play” or “ballot stuffing,” ostensibly taking a comical Thanksgiving-themed swipe at Americans who have lost confidence in the integrity of the nation’s electoral system.

During the turkey pardoning ceremony, Biden bragged about the Republican Party’s midterm underperformance and promised that the pardoning process was not rigged, as many Americans grow increasingly concerned over the legitimacy of modern elections.

“The votes are in. They’ve been counted and verified. There’s no ballot stuffing, there’s no fowl play,” Biden said.

“The only ‘Red Wave’ this season is gonna be a German Shepard, Commander, knocks over cranberry sauce on our table,” Biden said of the midterm elections.

“I hereby pardon Chocolate and Chip,” the president added.

Some Americans were left scratching their heads after the president asked one the turkeys if they wanted to speak.

“9.5 million turkeys! I tell ya what, that’s like some of the countries I’ve been to and they — anyway,” Biden said.

BIDEN: "9.5 million turkeys! I tell ya what, that's like some of the countries I've been to and they — anyway… *looks at turkey* you wanna talk?" pic.twitter.com/GgsRkr23nZ

Biden then looked at the turkey and asked it “you want to talk?” as he put the microphone in its face.

The president also acknowledged the presence of his deceased son’s kids, grandchildren Natalie and Beau Biden, after introducing groups of school children who attended the White House event.

Joe Biden: "That's my grandson Beau up there and my granddaughter. Don't let em jump!" pic.twitter.com/LV14riXCT4

“That’s my grandson Beau up there and my granddaughter. Don’t let em jump!” Biden said, followed by laughter from the audience.

The subject of Thanksgiving was brought up during 45th President Donald Trump’s official 2024 presidential run announcement, to which the former president warned Americans that the ongoing inflation crisis would impact the price of turkey.

“Good luck getting a turkey for Thanksgiving,” President Trump said. “Number one, you won’t get it. Number two, you’ll pay three to four times more than you paid last year.”

“We will bring our supply chains and manufacturing base back home as we were strongly doing during the Trump administration, and we will systematically bring back wealth, health, and success to the American middle class and to America itself,” he added.