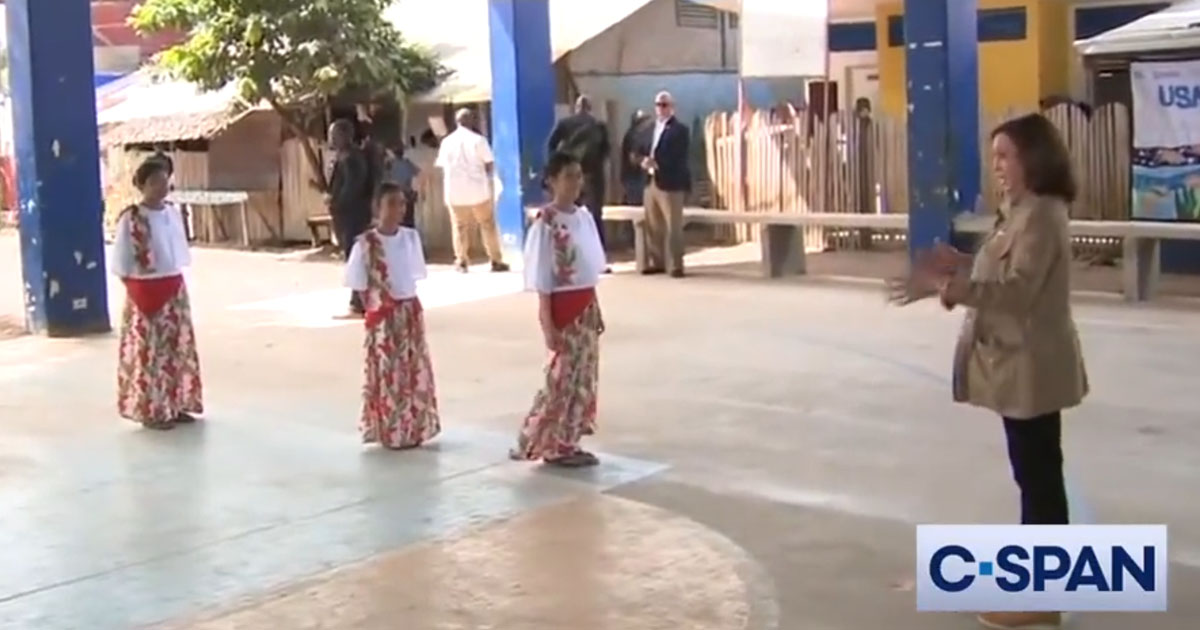 Vice President Kamala Harris had a strange interaction with a group of Filipino children this week during a trip to the Southeast Asian nation, ordering them to “show me the dance” and laughing in her trademark awkward style.

The encounter initially started in a friendly manner, with Harris telling the children “Thank you, I am so happy to see you. What a warm welcome.”

After a few moments of silence, however, Harris started looking back and forth at the group, gesticulating her hands and snapping, “Are you gonna keep dancing?”

The vice president then turned, guffawing, and looked toward an unknown person out of frame, who then told the children to keep dancing.

Kamala Harris greets a group of children in the Philippines: "Are you gonna keep dancing…?" pic.twitter.com/ZvbYAaubb8

Kamala Harris to kids in the Philippines:

“Are you gonna keep dancing?”

“Show me the dance!” pic.twitter.com/CKWwpvwSW0

Kamala Harris to kids in the Philippines:

“Are you gonna keep dancing?”

“Show me the dance!” pic.twitter.com/nXAD8lfBfo

In another trip to an Asian country earlier this year, Harris demonstrated ignorance about basic foreign policy by claiming the US has a “very important relationship” and “alliance that is strong and enduring” with the “Republic of North Korea.”

Harris made the remarks during an appearance at the Korean Demilitarized Zone, to an audience of South Korean citizens.

The Vice President did not appear to be aware of her gaffe, and did not immediately correct it.

Harris’ gaffe follows a viral incident yesterday where president Joe Biden called out for a dead woman in the audience during a White House conference.

Biden forgot that Rep. Jackie Walorski of Indiana had passed away, despite having said in a statement following her death that he and his wife Jill were “shocked and saddened” to hear of her passing.

Spread the love
In this article:Commentary, Featured, Kamala Harris, philippines