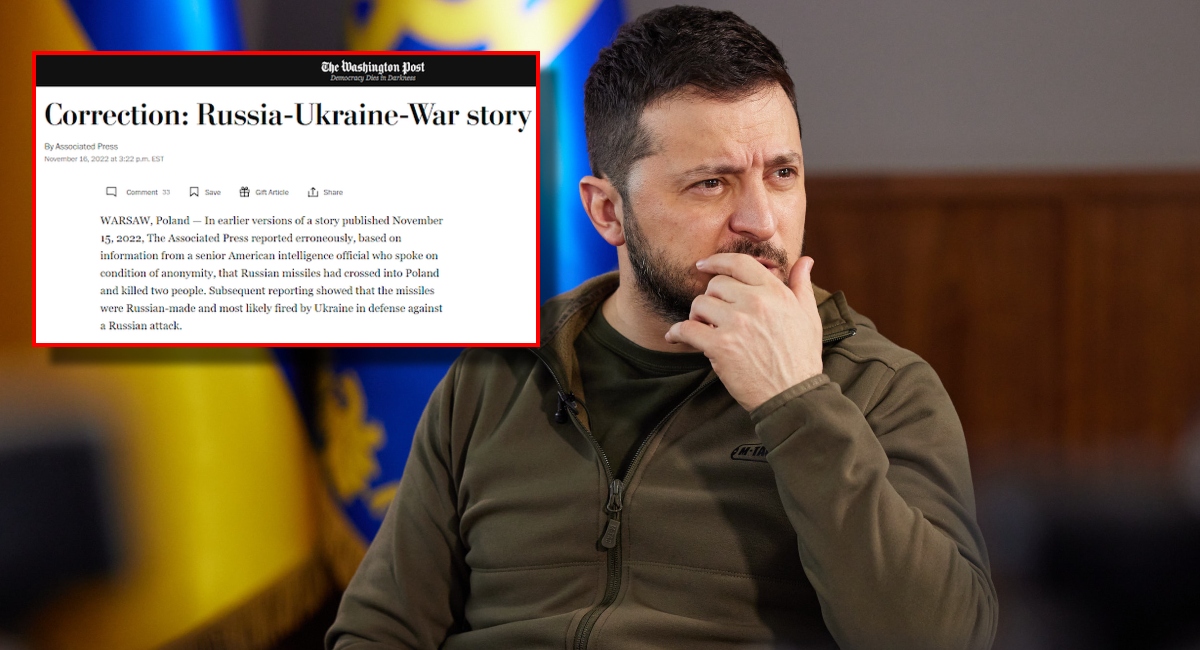 The Associated Press has officially issued a correction after falsely claiming that Russian missiles struck Poland and killed 2 citizens this week, in a now-proven-fictional event that could have triggered NATO Article 5 and kickstarted a Third World War.

“WARSAW, Poland — In earlier versions of a story published November 15, 2022, The Associated Press reported erroneously, based on information from a senior American intelligence official who spoke on condition of anonymity, that Russian missiles had crossed into Poland and killed two people,” the AP admitted.

In addition to admitting that their story was fake, the mainstream “credible” news outlet noted that the missiles in question were most likely fired by Ukrainian forces.

“Subsequent reporting showed that the missiles were Russian-made and most likely fired by Ukraine in defense against a Russian attack,” they added.

Associated Press Issues Correction To Its Fake Report Which Could Have Kicked Off WW3https://t.co/iZ8Y5LviTg

The allegations against the Kiev regime were backed up by a statement from Biden White House National Security Council Spokesperson Adrienne Watson, who confirmed that it was “most likely the result of a Ukrainian air defense missile that unfortunately landed in Poland.”

“We have seen nothing that contradicts President Duda’s preliminary assessment that this explosion was most likely the result of a Ukrainian air defense missile that unfortunately landed in Poland,” Watson said.

The White House still blamed Russia for the tragedy and insisted that Ukraine had every right to shoot the missiles.

“That said, whatever the final conclusions may be, it is clear that the party ultimately responsible for this tragic incident is Russia, which launched a barrage of missiles on Ukraine specifically intended to target civilian infrastructure. Ukraine had — and has — every right to defend itself,” she said.

After the AP published their fake story, Ukrainian President Vladimir Zelensky called for “action” from NATO against Russia.

“Hitting NATO territory with missiles… This is a Russian missile attack on collective security! This is a really significant escalation. Action is needed,” Zelensky said on Tuesday night.

Zelenskyy yesterday: “Terror is not limited to our national borders. Russian missiles hit Poland … NATO territory. This is a Russian missile attack on collective security — a very significant escalation. We must act” pic.twitter.com/zylfGdbwzw

Many critics online were concerned that NATO Article 5 would be triggered, thus leading western nations into a Third World War against Russia based on a fake story.

Since it was Ukraine's missile that hit our NATO ally Poland, can we at least stop spending billions to arm them now?

“The missile attack killing two innocent people in Poland was likely from Ukrainian Air Defense. We must stop letting Zelensky demand money & weapons from US taxpayers while he is trying to drag us into WW3. No more money to Ukraine. It’s time to end this war and demand peace,” tweeted Republican Congresswoman Marjorie Taylor Greene.

The missile that killed two people in Poland was likely from Ukraine Air Defense.

If Zelensky knew and chose to lie, the biggest national security threat we face is Ukraine baiting us into World War III.

Not a dime more. https://t.co/BrTmRSK6jG

At press time, Zelensky remains in disagreement with NATO and his Western allies over the origin of the missile that claimed the lives in Poland.