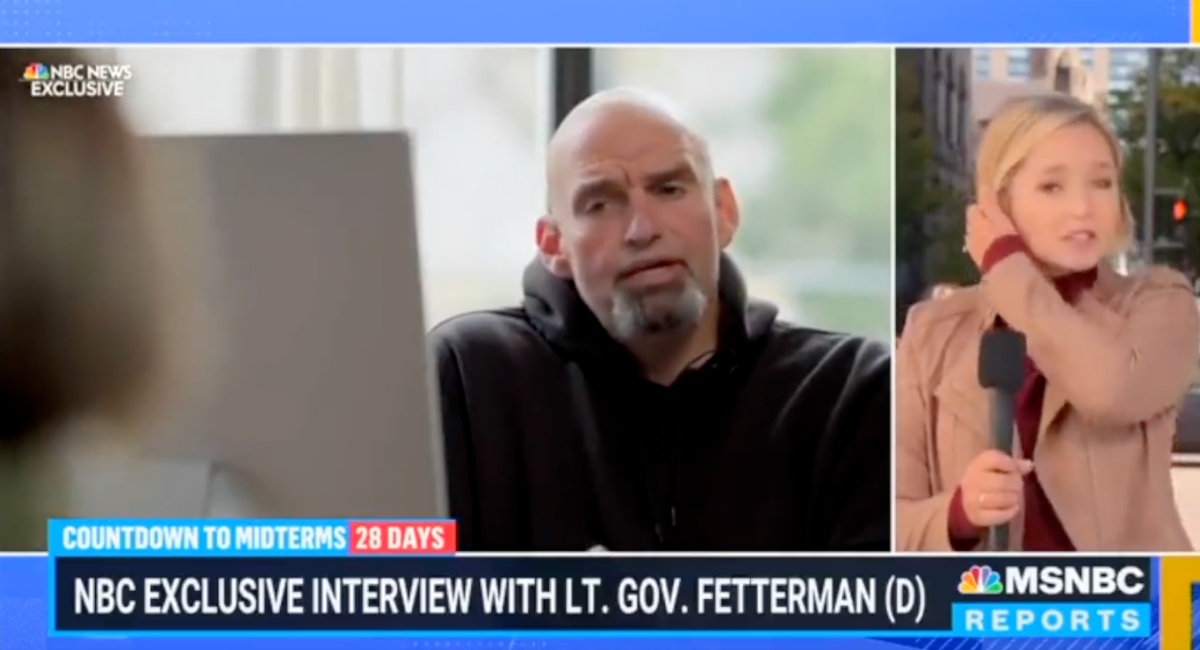 After Democrat Senate candidate John Fetterman attempted to be interviewed by NBC News, a reporter went on television to describe the trouble he faced with understanding the English language, adding that the Pennsylvania hopeful required her questions to be captioned in order for the interview to be conducted properly.

During the interview, the reporter explained that a “monitor” was put in place so that Fetterman could read her questions nice and easy, citing his “lingering auditory processing issues” resulting from a stroke.

John Fetterman sat down with NBC News for an interview tonight. He had to used closed captioning during the interview, the reporter says he had trouble speaking in the "small talk" before the captioning was on, and Fetterman's team is refusing to give them his medical records. pic.twitter.com/Y6tDhYMEPB

“We had a monitor set up so he could read my questions,” the reporter said. “He has a hard time understanding what he’s hearing.”

The reporter noted that even before the “closed captioning” apparatus was set up for Fetterman, he was unable to speak casually with her because he simply couldn’t understand the words that were coming out of her mouth.

“Now, once he reads the question, he’s able to understand. You’ll see here that he also still has some problems, some challenges, with speech,” she added. “And I’ll say, Katie, that just in some of the small talk prior to the interview, before the closed captioning was up and running. It did seem that he had a hard time understanding our conversation.”

The reporter added that even despite openly being unable to talk or speak with people, Fetterman’s team refuses to divulge his medical information.

Fetterman is not well. If you're struggling and unable to form coherent sentences this many months after a stroke, that speaks to serious cognitive problems.pic.twitter.com/sC2reVZHjs

“You saw and heard there the auditory processing challenges, the speech challenges. I’ve spoken with stroke experts, they say that folks can fully recover from that. But the caveat that every expert gives is that they can’t fully assess a patient without details on their health records, without that information that the campaign has yet to disclose,” she said.

Democrat John Fetterman: “The Eagles are so much better … than the Eagles!” pic.twitter.com/fHhwsVxdhA

“We’ve asked multiple times for medical records, we’ve asked for interviews with someone from his medical team. Those requests have so far been denied to NBC News and other outlets that have requested this,” the reporter stated.

Fetterman, the Democrat candidate for U.S. Senate in Pennsylvania who is still struggling with his speech after suffering a stroke earlier this year, mistakenly referred to Joe Biden as “Joe Bin” during recent radio interview, Valiant News reported just yesterday.

In the interview, Fetterman was asked if he would support a Biden 2024 reelection bid, as many Democrats have begun to call for the 79-year-old president not to seek a second term.

“I think that should be a decision made by Joe Bin,” Fetterman said of Biden.

John Fetterman: “I think that should be a decision made by Joe Bin.”