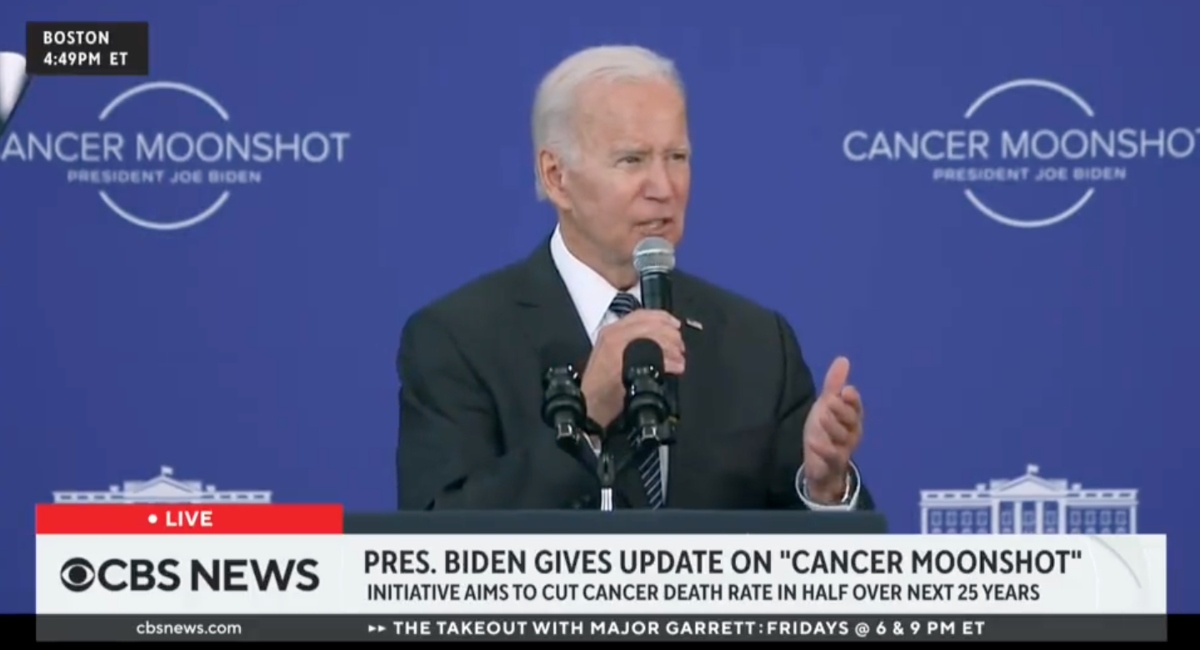 During a speech commemorating the 60th anniversary of President John F. Kennedy’s “moonshot” speech promising to put an American on the moon, Joe Biden claimed that his scientists are currently exploring how mRNA vaccines and new technologies could prevent and treat cancer through “gene therapy” in his own personal “moonshot for cancer.”

“This is a, all the way back ’62, the moonshot was announced,” explained 79-year-old Biden, “We’re gonna have a moonshot for cancer, for real. We’re gonna cure cancer over time. I’m gonna lay out how we’re gonna do that,” he said before arriving at Rice University in Boston.

During his speech, Biden told the public that “To prevent cancers, scientists are exploring whether mRNA vaccine technologies, that brought us safe and effective COVID-19 vaccines, can be used to stop cancer cells when they first arise.”

Biden: "To prevent cancers, scientists are exploring whether mRNA vaccine technologies, that brought us safe and effective covid-19 vaccines, can be used to stop cancer cells when they first arise." pic.twitter.com/edR2JODmwm

He claimed that, soon, vaccines may be able to prevent cancer, even as scientists and CDC officials admit that mRNA vaccines do not prevent COVID-19, but rather are alleged to lessen the virus’s symptoms.

“Vaccines that could prevent cancer,” Biden claimed. “Imagine molecular zip codes that could deliver drugs in gene therapy precisely to the right tissues. Imagine simple blood tests during an annual physical that could detect cancer early for the chance of the cure or best,” Biden said.

“Imagine getting a simple shot” apparently with an mRNA cocktail “instead of a grueling chemo, or getting a pill from a local pharmacy instead of invasive treatments and long hospital stays,” he added.

"Imagine getting a simple shot instead of a grueling chemo." pic.twitter.com/gxPWacOYuh

While the speech itself raised eyebrows, Biden’s remarks did not go without one of the president’s signature gaffes.

The president strangely claimed that the U.S. Department of Defense “has ability to calculate the Energy Department to a million billion calculations per second.”

Biden: "To the Defense Department that has ability to calculate the Energy Department to a million billion calculations per second." pic.twitter.com/pjh5jqUWJC

The elderly president also repeated that curing cancer was one of the main reasons that he ran for president, adding that he plans to create a “Cancer cabinet” to tackle the disease which he said “does not discriminate… It doesn’t care if you’re a Republican or a Democrat.”

Biden has also tapped Renee Wegrzyn to be his director of newly created Advanced Research Projects Agency for Health, which is “focused on biomedical innovation.” it has been reported.

Many will remember that in July of this year, Biden confused America by appearing to reveal he is currently suffering from cancer during a completely unrelated climate change speech.

He told Americans that air pollution causing an “oil slick” on his family car’s windshield some time in the 1950s is “why I and so many damn other people have cancer.”

The White House, citing a Washington Post columnist, later claimed that Biden was confused and simply referring to a skin cancer he had removed before running for the White House, though conservatives quickly poked holes in this theory.