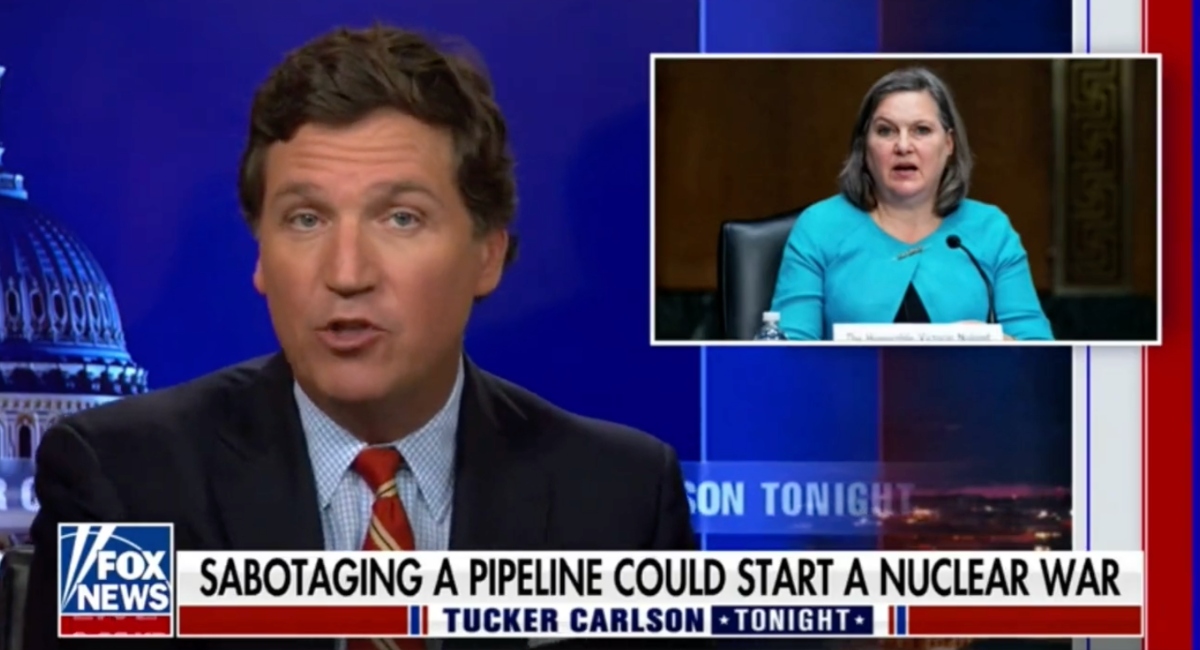 Fox News host Tucker Carlson speculated on the possibility that the Biden administration deliberately caused the explosions which are believed to have caused massive damage to the Nord Stream pipelines during Tuesday night’s episode of “Tucker Carlson Tonight.”

Concerns that the pipelines had been “sabotaged” circulated among some European government officials and users across the internet on Tuesday after images released by the Danish military appeared to show geyser-like natural gas eruptions in the Baltic Sea.

Carlson last night appeared to echo those concerns ahead of claims by western pundits that Russia could be responsible for destroying their own pipeline.

Tucker Carlson questions what happened to the Nord Stream pipeline:

"Did the Biden administration really do this?" pic.twitter.com/WnBw89L3gV

“If you are Vladimir Putin, you would have to be a suicidal moron to blow up your own energy pipelines, that’s the one thing you would never do,” Carlson said. “Natural gas pipelines are the main source of your power, and your wealth, and most critically, your leverage over other countries.”

“Europe needs your energy, now more than ever with winter approaching. If you can’t deliver that energy, then countries like Germany have no need to pay attention to what you want. You’re in the middle of a war, an all hands on deck war, so you need all the leverage you can get,” said Carlson of Russia.

“Under these circumstances, there is no chance that you would blow up Nord Stream 1 or 2, not now, obviously,” he added.

Carlson, like many others, pointed to Biden and Nuland’s past remarks in which they promised that the U.S. government would be able to destroy the pipelines if Russia took military action against Ukraine, which Russia ultimately did shortly thereafter.

The Fox News host subsequently noted a tweet by Polish MEP and former defense minister Radek Sidorski, who yesterday offered a thank-you to the U.S. government after the “deliberate” attack on the pipelines, despite no government or group claiming responsibility for the explosions.

BTW, there's no shortage of pipeline capacity for taking gas from Russia to Western Europe, including Germany. Nordstream's only logic was for Putin to be able to blackmail or wage war on Eastern Europe with impunity.

“Did the Biden administration really do this?” Carlson speculated. “It’s hard to believe, given that it’s an atrocity. It’s effectively an act of terrorism. We don’t want to make that accusation.”

“If they did this, this would be one of the craziest, most destructive things any American administration has ever done,” said Carlson.

“But, it would also be totally consistent with what they do. What do they do? They destroy. These people built nothing. Not one thing. Instead, they tear down and they desecrate — from historic statues, to the Constitution, to energy infrastructure,” Carlson noted.

The Nord Stream 1 and Nord Stream 2 gas pipeline systems were intended to transport natural gas from Russia to Europe, with each system being made up of two separate pipelines. Three out of the four pipelines are currently experiencing leaks, Danish and Swedish officials say.

Videos of American officials, including Joe Biden and Victoria Nuland, who vowed to “bring an end” to the pipeline system if Russia invaded Ukraine in January and February of this year began circulating online shortly after news of the explosions broke — raising suspicions that the destruction was caused by the United States.