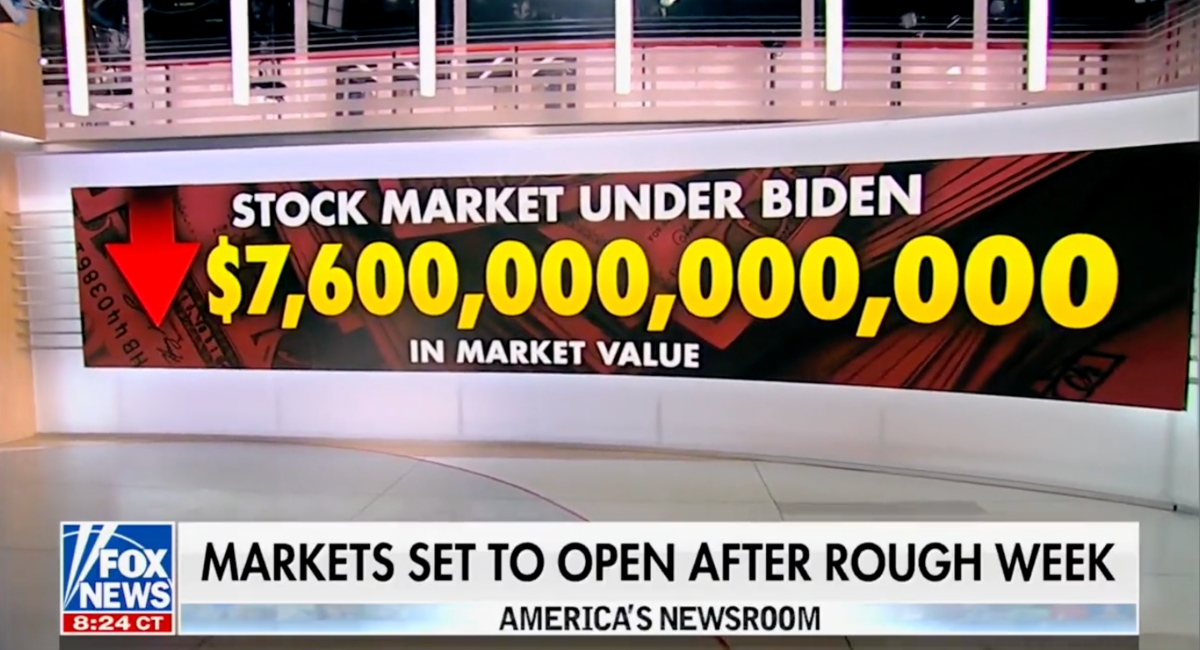 Experts confirm that the stock market has lost more than $7 trillion in value less than two full years into Joe Biden’s administration.

The U.S. stock market has dropped $7.6 trillion since Joe Biden took office in January 2021, Fox News reports, with experts claiming that the situation will continue to get worse with Democrats in power.

According to quantitative strategists at Sanford C. Bernstein, the market will continue to experience declines and a recession could “complicate” a market recovery.

The experts noted that the S&P 500 has historically fallen to 13% when economic indicators in the US signal a recession “as they are today.”

“We believe this bear market has more room to run because most major global synchronized selloffs have ended with a moderate inflation/low growth regime, and we are not there yet,” analyst Ann Larson said, adding that unsettling inflation data and “hawkish” signals from the central bank would “likely indicate that a Fed pivot is off the table anytime soon, making markets more vulnerable to rate hikes and growth concerns.”

Earlier this month, as Biden and several Democrats gathered to celebrate the passing of the controversial “Inflation Reduction Act” spending bill, cable network tickers ironically revealed that the stock market was plummeting 1,200 points in the middle of his speech.

Will never be able to get over the image of Joe Biden speaking about how he singlehandedly beat inflation as the stock market tanks over 1,200 points on live television due to inflation.

An all time moment in the history of American presidents. pic.twitter.com/agULMywRSL

The U.S. Department of Labor announced the day before that inflation had risen 8.3% in August, slightly more than expected, continuing the negative economic trend under the Biden administration.

However, House Republicans have unveiled a plan to combat the multitude of Biden-derived economic crises with what they’ve dubbed a “commitment to America.”

“We have a plan. Today, House Republicans are rolling out our “Commitment to America,” which is a bold conservative vision for a prosperous America that will reverse Biden and Pelosi’s self-made crises,” Rep. Steve Scalise wrote in an op-ed published by Breitbart News.

“Our plan is built on four key principles: an economy that is strong; a nation that is safe; a future built on freedom; and a government that is accountable.”