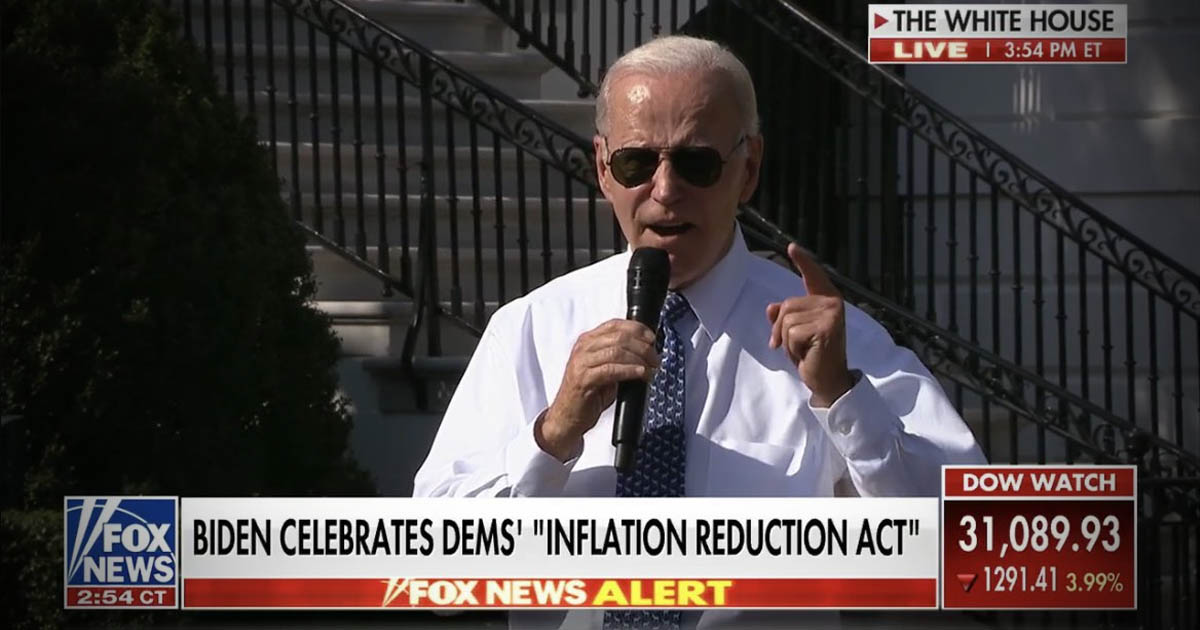 Joe Biden and Democrats gathered to celebrate the Inflation Reduction Act on Tuesday, with cable network tickers ironically showing the stock market plummet during his speech.

The Inflation Reduction Act, which was signed into law by Biden last month, includes at least $700 billion worth of spending over a period of 10 years, with $369 billion on clean energy and climate change, and another $300 billion on reducing the deficit.

“The single most important legislation passed in the Congress to combat inflation, and one of the most significant laws in our nation’s history in my view,” Biden said during a press conference broadcast by Fox News as a ticker revealed that nearly 4% of value had been wiped from existence on the news of 8.3% inflation in August.

Despite claiming that inflation was being targeted, the stock market ironically plummeted during Biden’s speech, tanking over 1,200 points due to inflation, as noted by Greg Price. In fact, stocks had their worst day since the start of the panic around the coronavirus pandemic in 2020.

Will never be able to get over the image of Joe Biden speaking about how he singlehandedly beat inflation as the stock market tanks over 1,200 points on live television due to inflation.

An all time moment in the history of American presidents. pic.twitter.com/agULMywRSL

Live on screen no less pic.twitter.com/C9pg4MKxOx

According to both the nonpartisan Congressional Budget Office and the Wharton School of the University of Pennsylvania, the act would have no statistically significant effect on inflation, while the Tax Foundation argued that it could even reduce GDP by 0.2%, wages by 0.1%, and cost 29,000 American jobs.

“With this law, the American people won, and special interests lost… This is what it looks like when the American government works for the people,” Biden said during the press conference. “When we tell the powerful interests, no, you’re not going to get your way. This time, not this year, not this time, not now…”

He continued, claiming that the bill “finally delivers on a promise I made to the American people for decades,” passing on a partisan Democrat vote.

“Folks, nobody ever in history, nobody this year the American people won, the climate deniers lost, and the Inflation Reduction Act takes the most aggressive action combat climate,” Biden said, in an incoherent statement. “As the Speaker said, ever, ever, ever. Over $360 billion.”

Inflation hit 8.3% in August, according to figures released by the Department of Labor, continuing the negative economic trend seen under the Biden administration, despite their attempts to keep the price of gas as low as possible.

During the same televised press conference, Speaker Nancy Pelosi had an awkward moment in front of the cameras. Praising Biden, she said that his “extraordinary leadership has made this glorious day possible.” When no response from the audience was forthcoming, she told those watching that that was “an applause line.” The crowd cheered in response.