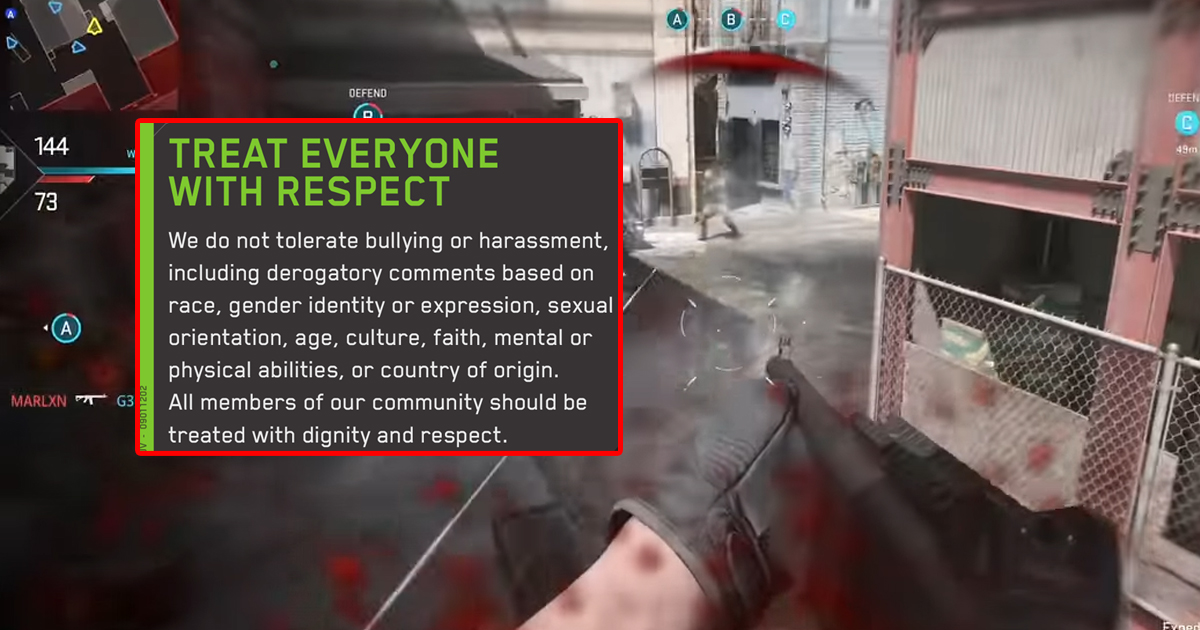 Gaming corporation Activision revealed a “Code of Conduct” alongside the beta release of Call of Duty: Modern Warfare 2 (2022) that forces players to agree to not use “offensive or harmful language,” or “Hate speech and discriminatory language.”

The bizarre “Code of Conduct” was unveiled in a Twitter thread last week.

“We do not tolerate bullying or harassment, including derogatory comments based on race, gender identity or expression, sexual orientation, age, culture, faith, mental or physical abilities, or country of origin,” the official Call of Duty account tweeted. “All members of our community should be treated with dignity and respect.”

“Communication with others, whether using text or voice chat, must be free of offensive or harmful language,” Activision continued. “Hate speech and discriminatory language is offensive and unacceptable, as is harassment and threatening another player.”

Today, we’re launching a new unified Code of Conduct for the #CallofDuty universe. Learn more about this and our Anti-Toxicity efforts: https://t.co/ADjAXFAckF

This effort is supported by three core values to promote a positive gaming experience for all 👇🧵 pic.twitter.com/k6AGY5TA3J

Players were also urged, “To promote an enjoyable gameplay experience, utilize in-game tools to report any incidents or inappropriate behaviors you encounter.”

Activision bragged in the new Code of Conduct that “we have seen a more than 55% drop in the number of offensive username and clan tags reports from our players, year-over-year, in the month of August alone in Call of Duty®: Warzone™.”

An area of lesser focus for Activision appears to be the quality of the gameplay itself, as the Modern Warfare 2 reboot beta has received overwhelmingly negative reviews from many players and content creators.

Skill-based matchmaking, perk balancing, low visibility, and uninspired graphics have all been cited by players as negative issues for the Modern Warfare 2 reboot.

In-game chats are so sterilized and monitored these days, people don't even bother using them for fear of being punished for some random bs.

Back in 360 days, a teeny bit of toxicity was part of the fun – instead nowadays we seriously are arguing about teabagging being a crime. https://t.co/GcPXJYRg7G pic.twitter.com/iGK2vZDpos

Star streamer and former Call of Duty map designer “Dr Disrespect” laid into Activision last week after it was revealed that Activision had banned his Call of Duty partnership because he “talked too much trash about the game.”

“Some people still don’t get the Two-Time,” Dr Disrespect said, referring to Activision’s treatment of his character. “It’s a lot of these young PR marketing people that are getting into Activision. I mean, you see the message going out yesterday, the ‘Code of Conduct.’ They had the full Twitter thread. I feel like the same people running Activision are the same people running Twitch. It’s like they’re all the same, huh? Is it me or are they all the same?”