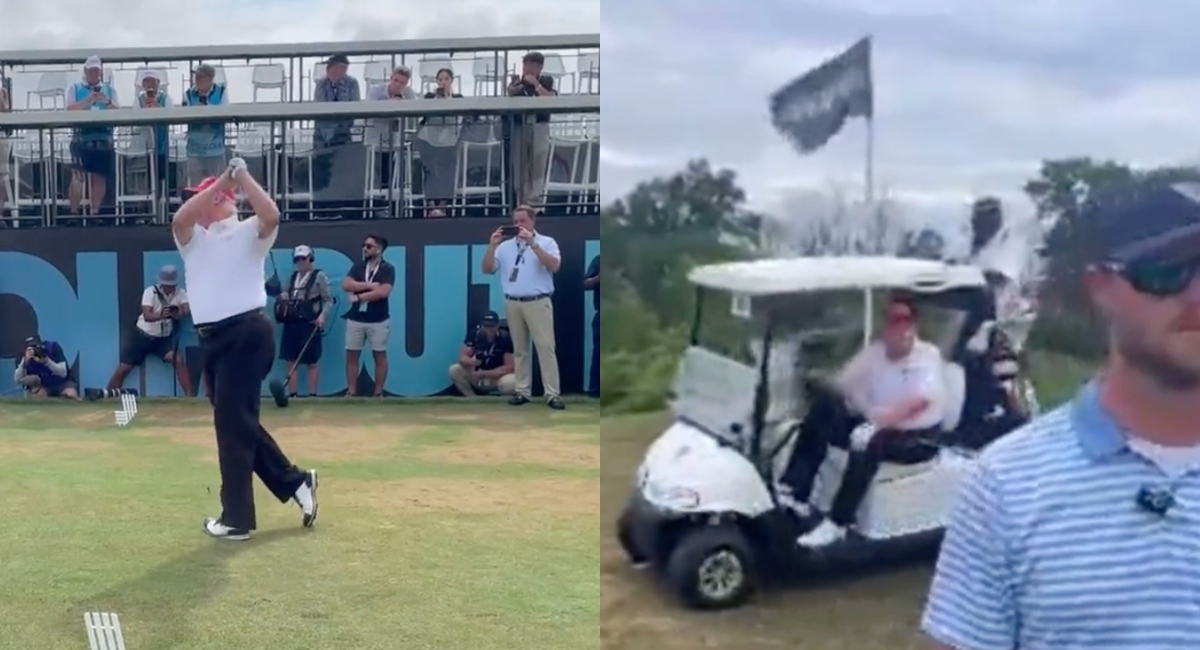 45th President Donald Trump was captured on video Monday boasting about his golf swing and openly questioned if Joe Biden would be able to drive a golf ball down the fairway in a similar fashion.

In the video, Trump is observed driving in a golf cart down the green as supporters of his applaud. “You see that John? Are you surprised? Were you able to see the ball going that far?” Trump said as his cart passed by.

“Absolutely!” a man replied. “We miss you so much, you have no idea.”

Trump: “Do you think Biden can hit a ball like that?”

Trump then waved and joked, “do you think Biden could hit a ball like that?”

“No chance!” the man said as Trump made his way down the course.

The remarks came during a tournament hosted at the former president’s Bedminster resort in New Jersey, where he was previously filmed on July 28 teeing off with a graceful drive.

“Glad that’s over with!” Trump said.

Donald Trump tees off at the LIV Golf pro-am pic.twitter.com/1Buzj40Psp

Throughout the duration of the tournament, many prominent Trump-friendly Republican figures have been photographed in attendance alongside Trump.

In the summer of 2020, @TuckerCarlson was so incensed by Jared Kushner’s influence over policy, he would not take Trump’s calls. If now, Tucker and DJT are aligned, it looks very good for the 2024 Restoration. pic.twitter.com/6eqZfGyIhp

“Let’s go Brandon” chant breaks out at #LIVGolf as President Trump, @DonaldJTrumpJr, @TuckerCarlson, @kimguilfoyle, @RepMTG, and @EricTrump stepped outside together.

While Trump faces criticism over the tournament due to Saudi Arabian funding, the 45th president noted that “nobody’s gotten to the bottom” of the September 11 attacks on the World Trade Center in 2001.

“Nobody’s gotten to the bottom of 9/11 unfortunately, and they should have, as to the maniacs who did that horrible thing to our city, to our country, to the world, so nobody’s really been there,” Trump said. “But I can tell you that there are a lot of really great people that are out here today and we’re going to have a lot of fun, and we’re going to celebrate.”