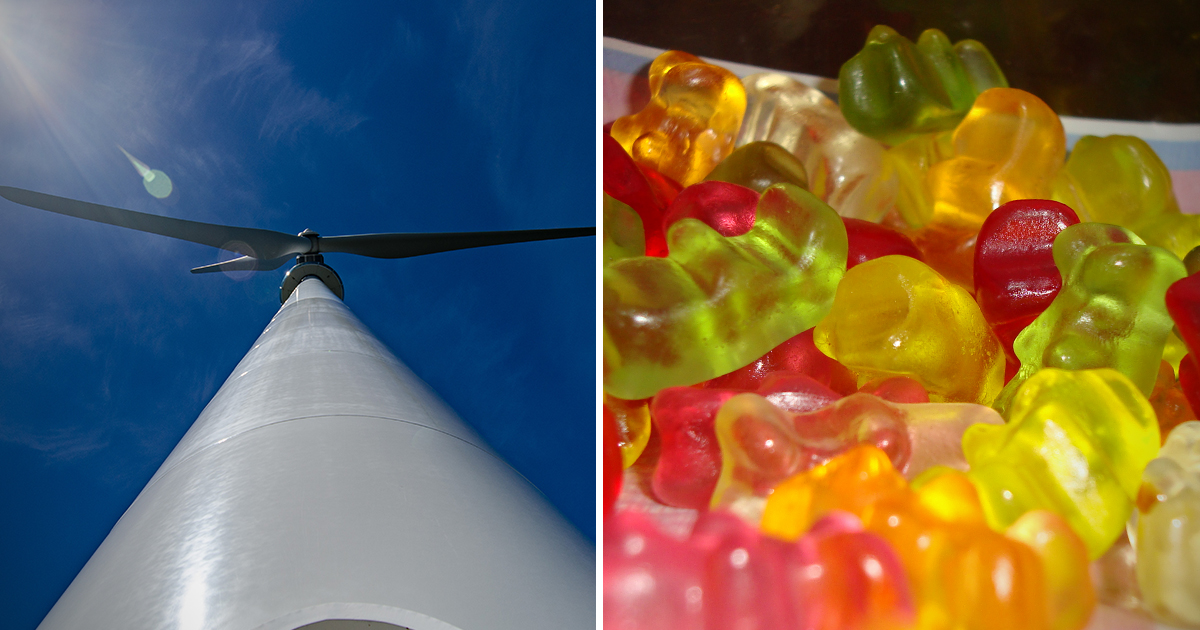 The group of scientists created a new composite resin to build the blades of the controversial energy producers, which are currently usually made of fibreglass, and are often now disposed of in landfills, causing new environmental problems while being designed to resolve old ones.

In order to solve this problem, the new resin, combined of glass fibre and plant-based and synthetic polymers, could be broken down by the end of the lifespan of the blades, researchers say, by digesting it into an alkaline solution. The resulting potassium lactate can then be made into various products, including sports drinks and “tasty” treats like gummy bears.

“We recovered food-grade potassium lactate and used it to make gummy bear candies, which I ate,” said John Dorgan, one of the scientists who worked on the project.

Dorgan argued that eating gummy bears produced from a wind turbine wasn’t weird at all. “A carbon atom derived from a plant, like corn or grass, is no different from a carbon atom that came from a fossil fuel,” he said. “It’s all part of the global carbon cycle, and we’ve shown that we can go from biomass in the field to durable plastic materials and back to foodstuffs.”

i will not eat the old wind turbines pic.twitter.com/yhKOS73dYg

He claimed that the resin system he and the team had created had a sense of “beauty to it,” because at the end of its use cycle, we can dissolve it, and that releases it from whatever matrix it’s in so that it can be used over and over again in an infinite loop,” noting it fitted with the goals of the “circular economy,” where waste products get constantly recycled back into use.

The idea was presented on Tuesday to a meeting of the American Chemical Society, with further plans in place to produce some of the blades for field testing.

The reveal of the strange gummy bear production cycle comes as various “new foods” are being suggested. A study from the University of Helsinki argued that eating meat grown in a lab and mashed-up bugs would help save the environment. British children have also been fed bugs at school as part of a science experiment.

Wind turbines are not only controversial because of pollution concerns, however. It is estimated that over 1 million birds are killed every year by wind farms in the United States alone, according to the Sierra Club.