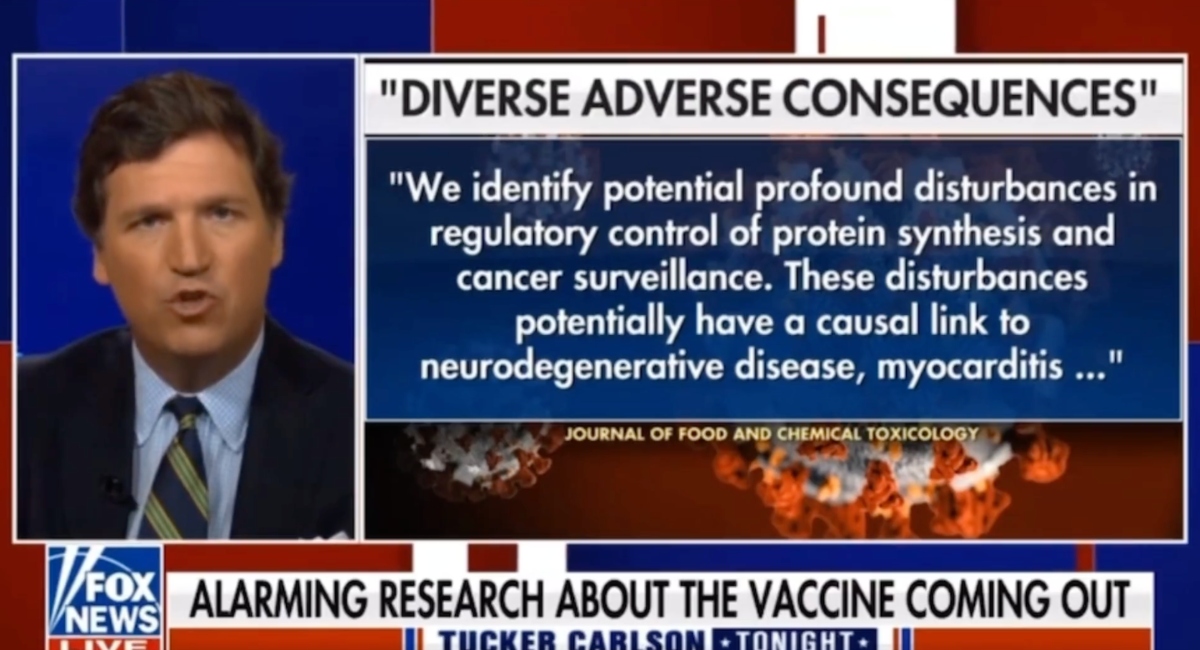 Speaking on his primetime Fox News show, Carlson noticed that “Joe Biden and a whole lot of other people have gotten pretty sick with COVID” despite having received “multiple” shots of the COVID-19 vaccine.

“Is there a connection between getting multiple COVID vax shots and getting sicker?” Tucker posited. “Is it possible that the vaccine can actually hurt you, especially  if you keep getting boosted?”

“Can it weaken your immune system? Well, it looks possible,” said Carlson, before revealing a study from the Journal of Food and Chemical Toxicology that said COVID-19 vaccines have “diverse adverse consequences to human health.”

It further highlighted that the COVID-19 vaccines may “have a wide range of consequences, not the least of which include the reactivation of latent viral infections and the reduced ability to effectively combat future infections.”

Carlson argued that with the results of the study, it was not only “possible,” but “looking likely” that COVID-19 vaccines may end up suppressing the immune system.

A second study from The Lancet journal, which, according to a letter written by expert Kenji Yamamoto to the Journal of Virology, showed that “immune function among vaccinated individuals 8 months after the administration of two doses of COVID-19 vaccine was lower than that among unvaccinated individuals.”

Tucker Carlson
Alarming research about the vaccine coming out pic.twitter.com/Wmghxeitsy

Dr. Harvey Risch, a professor emeritus of epidemiology at Yale School of Public Health, spoke to Carlson later on in the segment, who stated his concerns with the “credibility of medicine, about public health, about government institutions, about Congresspeople even,” given that “nobody has been forthcoming and talking about this.”

Risch claimed that a number of scientists and doctors were worried about coming out against the COVID-19 vaccines due to pressure and negative consequences, which Carlson suggested was similar to the conditions of the Soviet Union.

“Everybody’s got some reason to be scared about being public because of negative consequences to them, their economics, their family,” Risch concluded. “So, they prefer they just prefer to be under the radar.”