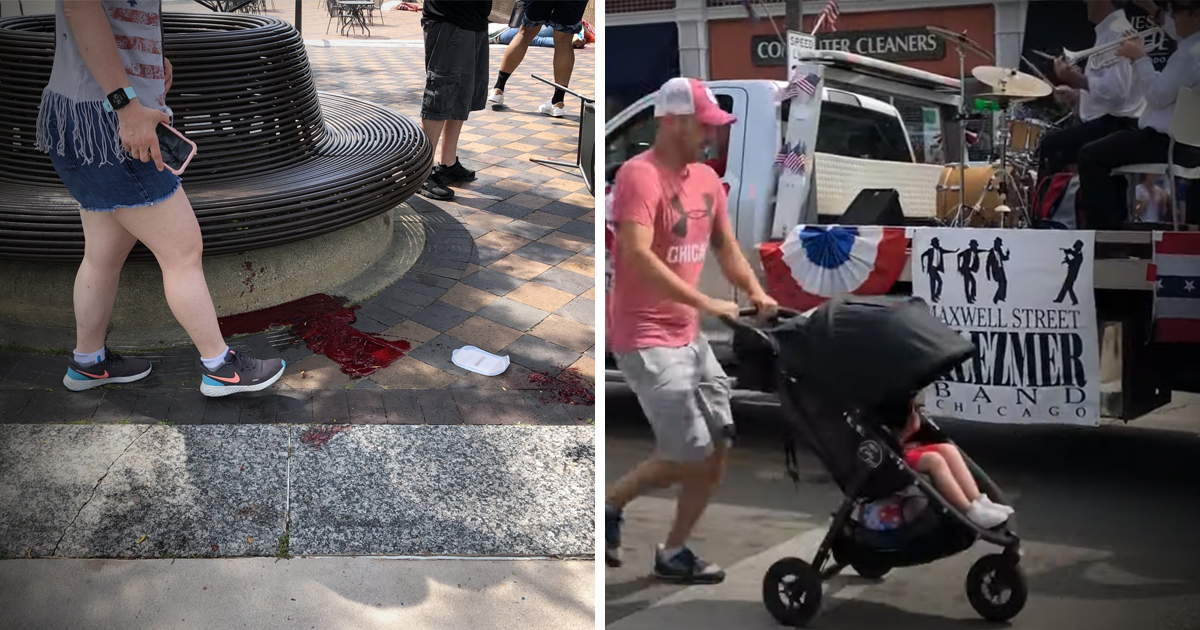 A Fourth of July parade in Highland Park, Illinois, was thrown into chaos on Monday morning after multiple people were shot, with at least six fatalities.

The Independence Day parade was taking place in Highland Park, a city in Illinois about 25 miles north of downtown Chicago. Videos from the scene showed people fleeing as shots rang out at around 10:10 local time, reportedly from a shooter stationed somewhere on the rooftop of an Uncle Dan’s outdoor equipment and clothing store, according to witnesses.

During the confusion, a local band on a parade float continued to play, while many attendees abandoned chairs, blankets, and even baby strollers running for cover.

“I heard 20 to 25 shots, which were in rapid succession. So it couldn’t have been just a handgun or a shotgun,” said Miles Zaremski, a Highland Park resident, the Chicago Sun-Times reports. He added that he saw “people in that area that got shot,” including a “woman covered with blood,” who did not survive. One reporter saw blankets covering three bodies.

Bloodbath at #Highland Park July 4th parade.. I was there.. story at @suntimes pic.twitter.com/zuUQMO7Dxy

The most recent reports from local authorities have confirmed that at least six people who attended the Fourth of July parade were killed in the shooting, and that 24 people are currently hospitalized.

Highland Park Police Department confirmed in a press conference that the suspect is still at large, with “numerous federal, state, and local law enforcement agencies” searching for him. The suspect is described as a white male, aged 18-20, with long black hair and a small build.

At least one firearm has been recovered from the scene, Highland Park Police noted, adding that they have currently secured the perimeter around downtown.

Law enforcement give description of suspect in Highland Park parade shooting: Described as 18-20yo white male, longer black hair, slight build. A gun was recovered at the scene: https://t.co/bMCmq8AHHx pic.twitter.com/UL33Qn08Lh

Adrienne Drell, a former reporter with the Chicago Sun-Times, told the paper that she was scooped up from sitting on a sidewalk curb watching the parade by a man who told her to get out of there. She said that she saw students from the local high school marching band start to run from the scene.

“It was a quiet, peaceful, lovely morning, people were enjoying the parade,” she said. “Within seconds, to have that peacefulness suddenly ripped apart, it’s scary. You can’t go anywhere, you can’t find peace. I think we are falling apart.”

Police were on the scene almost immediately, given that the parade already had a strong presence from both the police and fire departments.

Representative Brad Schneider, a Democratic congressman for the area that includes Highland Park, tweeted that he and his team were in attendance at the Fourth of July parade, while Illinois Governor JB Pritzker confirmed that he was monitoring the situation.

This is a breaking story and may be updated.