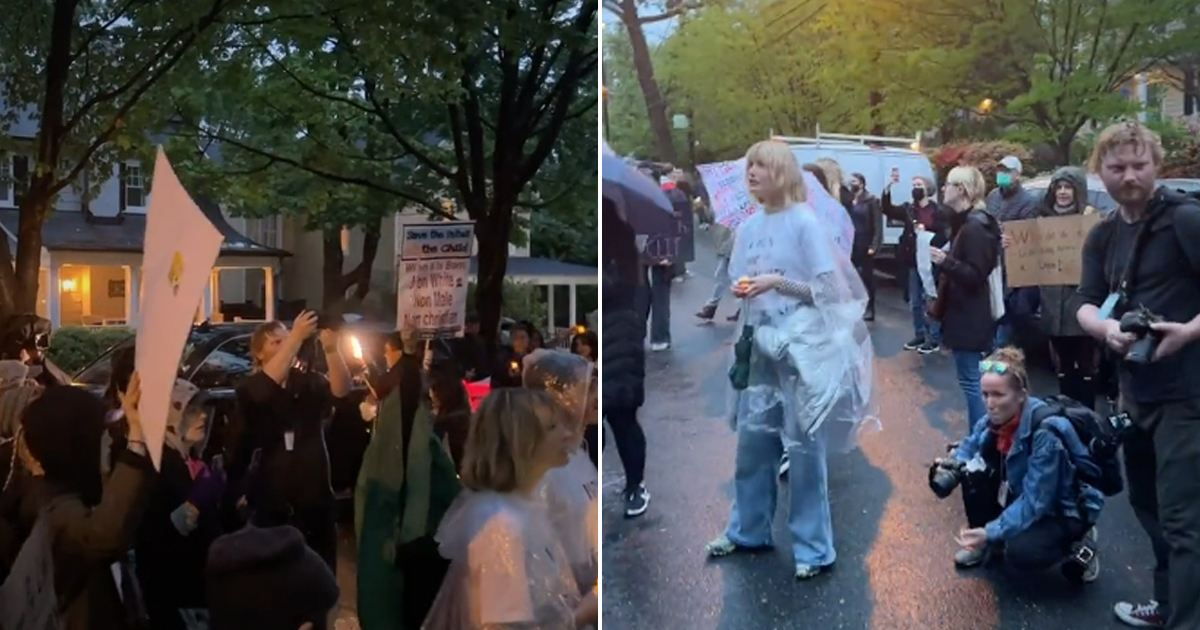 Supreme Court Justice Samuel Alito and his family have reportedly been moved to a secure location for safety, following threats and intimidation from radical left pro-abortion supporters.

In an attempt to threaten the conservative SCOTUS justices into reversing course and upholding the controversial Roe v. Wade ruling after a leaked opinion revealed it would soon be overturned, leftist groups such as “Ruth Sent Us” and “ShutDownDC” have leaked the home addresses of conservative justices on the internet and have showed up en masse to their residences.

According to Yahoo News, “Activists protesting against the Supreme Court’s expected ruling gutting Roe v. Wade gathered outside the homes of two conservative justices over the weekend and plan to do so again later this week.”

Nearly 100 protesters apparently gathered outside the Maryland home of Justice Brett Kavanaugh, before marching to the nearby home of Chief Justice John Roberts.

“The time for civility is over, man,” protest organizer Lacie Wooten-Holway said. “Being polite doesn’t get you anywhere.”

“Justice Alito thinks he can take away our rights. But our rights are fundamentally ours.”

“We’re showing up to tell him in person,” ShutDownDC tweeted.

Justice Alito thinks he can take away our rights. But our rights are fundamentally ours. We're showing up to tell him in person. #BansOffOurBodies #AbortionIsHealthCare #AbortionIsEssential pic.twitter.com/zY69Ehmqq1

According to a draft majority opinion written by Justice Alito that was leaked to Politico, the SCOTUS is set to overturn Roe.

“Roe was egregiously wrong from the start,” Alito wrote in his opinion that Politico described as a “full-throated, unflinching repudiation of the 1973 decision which guaranteed federal constitutional protections of abortion rights and a subsequent 1992 decision – Planned Parenthood v. Casey – that largely maintained the right.”

The energy is markedly more negative outside Kavanaugh’s house. The anger has become much more palpable than outside any other justices’ house. pic.twitter.com/zY2OY34hcA

“We hold that Roe and Casey must be overruled,” Alito continued. “It is time to heed the Constitution and return the issue of abortion to the people’s elected representatives.”

Despite rage from leftist groups across the country, Chief Justice Roberts recently told judges gathered for the 11th Circuit Judicial Conference meeting in Atlanta, Georgia that there was no way the recent leak of a draft decision that would overturn Roe v. Wade would change the Court’s plans, Valiant News reported.

Roberts said it would be “foolish” to think such a leak would prevent the Supreme Court from doing its job.