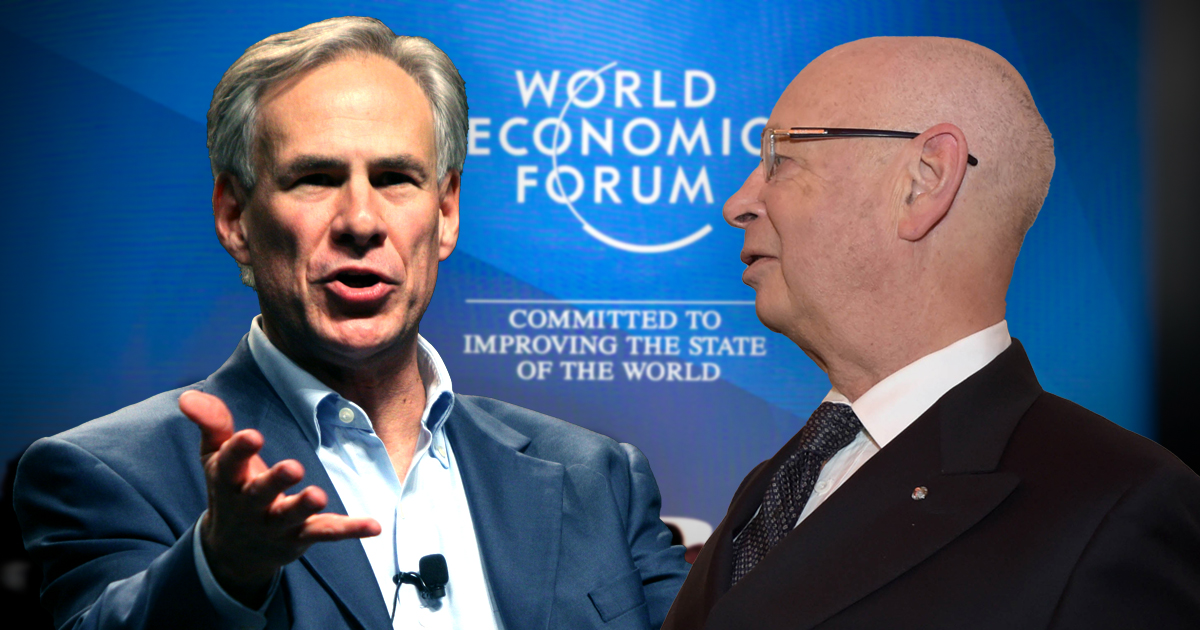 “Klaus Schwab of the World Economic Forum has bragged about infiltrating governments and grooming political leaders,” said Campbell after Abbott agreed to answer his question. “Now, you know, he’s for the Great Reset, pushing for it, Agenda 2030 — complete globalization.”

“Do you denounce the World Economic Forum, Klaus Schwab, and the Great Reset?” Campbell asked him.

Rather than a simple yes or no, Abbott replied “Listen, I’m not a globalist. I’m a Texas First and America First person.”

Campbell repeated, “But do you denounce Klaus Schwab and the Great Reset?”

Abbott deftly dodged the question a second time. Instead, Abbott replied “I promote Texas and America.”

Abbot, who told Campbell he is “a Texas First and America First person,” is listed as a member on WEF’s website.

“A productive last day in Davos at the World Economic Forum,” he tweeted.

“This morning I met with @francoislegault, Premier of Québec. Texas has a strong economic relationship with Québec & we are proud to be here to continue & strengthen this bond. @wef #wef20″

“Busy day at the World Economic Forum in Davos. I met with Secretary Wilbur Ross to discuss the USMCA & China trade deals. Texas will be a winner. Separately I met with a CEO who is moving his business from another state to Texas. Leaders love the Texas approach to business,” Abbot posted to Facebook during the trip.

A productive last day in Davos at the World Economic Forum.

This morning I met with @francoislegault, Premier of Québec.

Texas has a strong economic relationship with Québec & we are proud to be here to continue & strengthen this bond. @wef #wef20 pic.twitter.com/tUUXRXEr4t

The WEF came under scrutiny after videos of Schwab admitting his organization has been “penetrating” high-level positions in western governments in order to usher in his “Great Reset” resurfaced online.

Ideology of @wef is a direct threat to American way of life. Not enough conservatives calling it out by name yet. Here is @ProfKlausSchwab bragging about his infiltrating Western governments across the world w/ "Great Reset" adherents, including Canada's PM. Lockdown architects. pic.twitter.com/44TWEBDW2k

The Great Reset, once claimed by “fact checkers” to be some sort of “conspiracy theory,” is understood by many to be a “reset” of global economics to replace the current system. Schwab appears to refer to this process as the “Fourth Industrial Revolution” and has written two books on the subject.

Concerns with the Great Reset include the ideas of population control, high-tech invasive surveillance, a global social credit system, and the calculated destruction of economies to usher in world government in the aftermath of the COVID-19 pandemic, but experts dismiss these concerns as unwarranted and those who express them as “conspiracy theorists.”